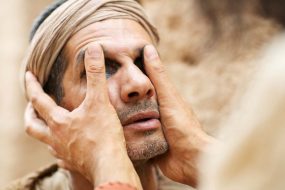 When something miraculous happens to us, we naturally want to share the good news with others. Yet when we try to share the blessing with others, we are too often met with anything but joy. Don’t be discouraged; this is nothing new; it’s happened throughout history and continues today. People are trying to rob you of your miracle.

There is a story in the scripture illustrating this very same scenario. When I read it, I thought, wow, this could be today—the miracle itself, the reaction of others, all of it.

The story begins in John 9:1 “As he passed by, He saw a man blind from birth.” While Jesus’s disciples inquired if the man was blind because of sin in the family, Jesus “spat on the ground, and made clay of the spittle, and applied the clay to his eyes, and said to him, “Go, wash in the pool of Siloam.” So he went away and washed, and came back seeing.”” (John 9:6-7).

Those that witnessed the miracle right away didn’t believe it. The Debbie-downers of the day tried to deny the event, insisting the person who received it was a different man. They didn’t say ‘praise God,’ ‘how wonderful,’ or ‘please tell us about this wonderful thing.’ No, it was – you’re not the blind beggar; you are someone else.

The formerly blind man kept insisting, “I am the one.” Still unconvinced, those present asked, “How then were your eyes opened?” At this point, they could no longer deny the miracle, but their unbelief required an explanation: this couldn’t have just happened; something else happened, or someone else intervened to restore this man’s eyesight. So the formerly blind man told them the whole story.

Still, there was nothing but doubt, and “They said to him, where is He?” He said, “I do not know.”

Because we still don’t believe you (or are just jealous of you), we will take you to the experts; maybe they can explain this miracle away and attribute it to anything but an act of God. Sound familiar? You know what I’m talking about; you share your life-changing event, the person you share it with smiles, and says ‘wonderful,’ with that air of ‘if you say so.’

So the unconvinced crowd brings him to the Pharisees (the religious experts of the day), the priests who were supposed to be the men closest to knowing God’s will. The formerly blind man tells the story of the miracle to the experts. And wouldn’t you know it -right away, they criticized not only the phenomenal event but denied it came from God.

Why? Because they were the Pharisees, they were the administrators of miracles. They were in charge of how God’s glory was to be displayed and dispensed. You see, at this time in history, the Pharisees decided which priest did what; being a Levite no longer was the sole deciding factor. How dare this Jesus person perform a miracle that they did not authorize or sanction. So they insisted, “This man is not from God, because He does not keep the Sabbath.” Thus implying Jesus was a sinner. They refused to believe God’s hand in this because it didn’t fit into the law, as they understood it.

It’s no different today. Works and miracles of God are balked at because they don’t fit into the established understanding of the laws of physics and medicine. Since they can’t explain it, they put it back on you, the recipient of the miracle, to explain it. And since you can’t, they believe you less; they attack your faith with their logic.

The Religious experts came to the same conclusion as those who first witnessed the restoration of the man’s sight. They didn’t believe he was the same person, so they drag his parents in to confirm that the once blind man was their son.

The Pharisees ask the parents to explain the miracle. “Then how does he see now?” How many explanations do you need before you believe? The parents couldn’t explain it, so it circles right back around to the formerly blind man when his parents say, “Ask him; he is of age, he will speak for himself.” The Pharisees finally, reluctantly, unable to deny the miracle, say, “Give glory to God; we know that this man is a sinner.”

Jesus performs a miracle, yet He’s a sinner? And He’s not from God because he violated their interpretation of the Sabbath?

Can’t you see the so-called religious leaders of today – the priests, bishops, cardinals, and pastors saying – hey, we are glad you can see again, but it’s not a miracle unless we say it is? Unless we certify it and declare it a miracle, it’s not.

Can’t you picture the faces of those you worship with, claiming to believe in miracles, displaying the face of unbelief when you try to share your blessing? I can. I’ve witnessed it!

“One thing I do know, that though I was blind, now I see.”

Your miracle may not be as dramatic or as sensational as this man’s, but it’s a miracle nonetheless. Don’t let others’ lack of faith rob you of the blessing you’ve received. When Our Lord Jesus performed this miracle, it was for a broad audience and timeless message.

Some miracles are personal, private victories of faith. The miracle you experience may be for your enlightenment alone; it may be for a small circle of friends. Or it may just be a miracle that affects hundreds of lives. They come in all forms, great and small. It’s not up to us to determine the size or importance of the miracle.

All true miracles happen to glorify God through his Son, The Lord Jesus. It’s an act of grace when we are allowed to be a part of an event that celebrates God.

If God grants you a miracle, it must be shared to bring glory to God through you. Be a good steward of the blessing of which you’re part. Share it to his credit, no matter how many doubters you encounter. And should they ask you to explain it, tell them – I don’t know –“One thing I do know, that though I was blind, now I see.”