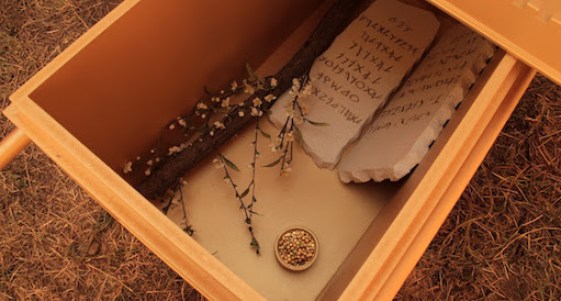 In I Kings 6 and 7, we find the details of the construction of the temple. The temple replaced the mobile tabernacle as the place to worship and conduct ritual sacrifices. King David wanted to build the temple but was not allowed to do so because of his sin with Bathsheba. The fulfillment of David’s desire to construct the temple would fall to his son, King Solomon.

The architectural details of the temple are generally not that interesting to the casual reader of the Scriptures. It’s somewhat like reading the long genealogies recorded in the Bible. Important yes, captivating, not so much. But there are spiritual lessons we can glean from the details of the temple’s construction and dedication if we pay attention.

One of the marvels of the Bible is symbolism depicted by actual events that relay spiritual truths, and the record of the temple’s construction and dedication is one of these events. This symbolism creates doorways which when opened, reveal spiritual truths.

The doorway to the spiritual lesson in this article is not in the details of the construction itself but during the temple’s dedication. The record of these events contains a curious verse.

I Kings 8:9 “There was nothing in the ark except the two tablets of stone which Moses put there at Horeb, where the Lord made a covenant with the son’s of Israel, when they came out of the land of Egypt.”

Wait, what? Why mention this.

Biblical content is not by chance; no matter how seemingly obscure, it’s there for a reason. Perhaps, one of those reasons is to garner our attention. To make us delay just a bit to think, investigate, and possibly discover spiritual truth.

What was supposed to be in the ark besides the two tablets of stone? There are two other items mentioned in the Bible. The first one is a bowl or jar of manna. In Exodus 16:33-34

“Moses said to Aaron, “Take a jar and put an omerful of manna in it, and place it before the Lord, to be kept throughout your generations.”

“As the Lord commanded Moses, so Aaron placed it before the Testimony, to be kept.”

A jar of manna was to be kept in the ark. Manna, the miraculous ‘bread of heaven’ provided for the Hebrews during their 40 years of wandering in the wilderness of Sinai. God provided manna six days a week, and it continued until Israel’s children crossed the Jordan River and came into the ‘promised land.’

“But the Lord said to Moses, “Put back the rod of Aaron before the testimony to be kept as a sign against the rebels, that you may put an end to their grumblings against Me, so they will not die.”

So these are the two items in the ark before the Temple dedication but are now missing. And again, if this fact wasn’t necessary, why record it. There are a couple of suggested explanations, actually, three that I know of, why the ark only contained the tablets of stone in I Kings 8:9.

The first one is -they were never in the ark, just in the Holy of Holies along with the ark. This argument doesn’t work because of two facts. One, in Hebrews 9: 4 it clearly states;

“having a golden alter of incense and the ark of the covenant covered on all sides with gold, in which was a golden jar holding the manna, and Aaron’s rod which budded, and the tables of the covenant;”

Another reason this argument fails is the definition of the testimony. The ark of the covenant was not the testimony; the tablets of stone, the ten commandments, was the testimony, according to Exodus 25:16

“You shall put into the ark, the testimony which I shall give you.”

Exodus 25:21 and 31:7 also describe the tablets of stone as ‘the testimony.’ To be placed ‘before the testimony’ means in the ark.

The second theory is the jar of manna and Aaron’s were taken out of the ark by the Philistines when they captured it decades prior. There is merit to this argument, and it makes sense, but it begs the question -why take two items out of the ark and not all of the items?

The Philistine’s fear of the ark of the covenant after “God struck them with tumors” and its voluntary return makes me doubt they would dare return the ark without all of its contents intact. Maybe the jar of manna and Aaron’s rod were already missing when they took it. Yet, if that’s the case, why was it not mentioned before I Kings?

The third theory I found on the Jewish website Chabad.org. The Rabbi says in response to the question about the missing items;

“The aron, Aaron’s staff and the jar of manna were hidden by King Josiah in subterranean tunnels beneath the Temple Mount (see II Chronicles 35:3).”

I’m sure there’s a reason for this answer, but I fail to see it, and I don’t see the need for a lengthy discussion contesting this theory. Suffice it to say, when we reach I Kings 8 and before II Chronicles 35:3, the two items were already missing.

Now, let’s consider this – since we know the ark’s purpose is to contain the testimony, whatever is missing from the ark was part of God’s testimony.

The other missing item is Aaron’s rod (or staff, the term for staff is often rendered rod in Hebrew). Aaron’s rod makes its first appearance as a spiritual tool of great power in Exodus 7:9;

“When Pharaoh speaks to you, saying ‘work a miracle,’ then you shall say to Aaron, ‘Take your staff and throw it down before Pharaoh, that it may become a serpent.'”

Pharaoh’s sorcerers threw down their staff’s, and they became serpents, but the staff of Aaron showed superiority in Exodus 7:12

“For each one threw down his staff and they turned into serpents. But Aaron’s staff swallowed up their staffs.”

Aaron’s rod (which became a serpent) swallowed up the other serpents. The rod of Aaron became the power that swallowed up death. The serpent represents death throughout the Bible. Death, the mortal and spiritual enemy of man since the Garden of Eden. No wonder Aaron’s rod was to be part of the testimony.

Aaron’s rod would be part of another miracle. In Numbers 16, we find a revolt of the tribes of Israel against Moses and Aaron as to who would decide who spoke for God. To settle the argument, God instructed Moses to collect a rod from each of the twelve tribes’ families and place the rods in the tent of the testimony. In Numbers 17:8, we read;

“Now on the next day Moses went into the tent of the testimony; and behold, the rod of Aaron fro the house of Levi had sprouted, put forth buds and produced blossoms, and it bore ripe almonds.”

The second item no longer in the ark of the testimony was the jar, or bowl, of manna. That angelic food was miraculously supplied to the Hebrews during their forty-year trek through the wilderness. It was physical food as well as spiritual food.

Today, our spiritual food, our manna, is the Word of God. It’s what nourishes us spiritually as we travel in the wilderness of this life. It is the bread of life.

These three items completed the testimony contained in the ark.

It contains the law of God (in the Ten Commandments).

It contains the manna (the spiritual food of God relayed by the Holy Spirit through God’s Word).

It contains the rod of Aaron (symbolizing God’s power over death and of resurrection). The Lord Jesus, our savior who overcame death and is firstborn of the resurrected, is our high priest, chosen of God, just as Aaron selected by God, signified by his rod.

Another rod mentioned in the Bible; the Lord Jesus will wield a rod of iron to rule the nations upon his return (Revelation 12:5).

Somewhere between the original placement of these articles in the ark of the covenant and I Kings 8:9, we find these two parts of the testimony missing. So what can we glean from this? The temple Solomon constructed to be the Lord’s house was planned in great detail, meticulously built, using the finest material by the finest craftsmen of the day. It was indeed a sight to behold.

The interior covered in gold and fitted with the finest furnishings, a spectacular place, would impress anyone who saw it. During the dedication ceremony, when the Levite’s brought the ark of the covenant in the temple and placed it in the Holy of Holies, we find another odd fact recorded in I Kings 8:8;

“But the poles were so long that the ends of the poles could be seen from the holy place before the inner sanctuary, but they could not be seen outside;”

I’m sure there was no mistake in the dimensions of the Holy of Holies, so the poles used to carry the ark were not the originals. These poles were longer, in fact too long. This verse gives us another hint that something wasn’t exactly correct.

Two essential pieces of God’s testimony were missing, and those priests needed to be continually aware of that fact. Every day that priests would go into the Holy Place, they couldn’t help but notice the poles of the ark sticking out from behind the veil between the Holy Place and the Holy of Holies.

Is it that way in our life today? We have the law of God in our hearts, but we are missing two essential pieces of testimony that complete our relationship with God. Perhaps we keep the law of God (morally) but have not experienced the power over death to the old way of life and resurrection to the new life in Christ Jesus?

Do we struggle because we are not partaking of the manna of life, given by God through his word? Or are we like the temple, glorious outside but incomplete on the inside, having only part of the testimony in our hearts?

The priests of the time of our Lord worked in the chosen places, had the choicest of food to eat, the most ornate garments to wear, and were experts of the Mosaic Law, yet Jesus time and time again tried to teach them the incompleteness of their priestly lifestyle. He would use the law to show them they didn’t understand the spiritual meaning behind the law.

Do we read the Bible yet fail to partake of the manna in the word? Have we shut out the Holy Spirit, the giver of the hidden manna contained in God’s word, and satisfied ourselves with simply reading God’s word in the context of the ten commandments, yet not comprehending its life-giving ability.

Let us be sure our hearts, our Holy of Holies, has the complete testimony of God residing there that we have the Law of God, which is easier to keep once we’ve experienced the power of death to the old life and resurrected in the new. May we realize this manna, this bread of life, will empower us to endure the trials of this life and be drawn closer to our Lord by our daily consumption of the manna of the Word.

May we not be concerned with being pretty on the outside, putting on airs, trying to convince others, but focus on God’s testimony, which we carry on the inside. We see from I Kings 8, it’s not only what’s there that’s important, but what is missing.