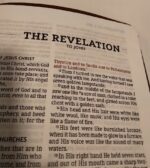 It’s fair to say the Book of Revelation is one of the most discussed books in the Bible. Both casual and serious students of scripture have written countless exegesis’s on this book, and I believe it will continue until our Lord’s return. I have read a number of these offerings. Some I think are partially accurate, some lacking, and others are not worth consideration.

I say some are partially accurate because I have never read a single one who was dead right from beginning to end. I intend to share some of my thoughts on this extraordinary book, yet not in a manner you’d expect. I have no ax to grind, no doctrine to present, just observations to share in the hope that two things will happen due to my efforts.

First, that this will bring glory to My Lord and Savior Jesus Christ, for without the guidance provided by His Holy Spirit, I could not understand anything written in this marvelous book. And second, what is shared here will inspire others to dig deeper and challenge what I have written in the stern hopes it will draw them closer to God’s love offered through His son Jesus.

In this article, you will not find my specific interpretation of events, timelines, and characters found in the book of Revelation. Those findings will be the subject of separate articles. My intention here is to give some basic guidelines to the reader while seeking the truths contained therein for themselves. And with an open mind, allow the Holy Spirit to reveal what they are to know.

By guidelines, I mean fundamental facts, basic truths, that you as a reader, and student of Revelation, should always bear in mind when reading and trying to understand what is before us. Conclusions you come to as a result of your studies, or other commentaries, should constantly be tested against these fundamental facts.

I believe that no one person does or will understand the Revelation fully. Not in this life anyway. I’m convinced that is God’s intent. In the next life, all will be clear, but for now, let us be satisfied with what we can grasp and act on it. I do not claim the final authority on the book of Revelation, but enough of its meaning has been revealed to me that I understand the book’s point.

The purpose of Revelation is to provoke action, and that action is the carrying out of God’s will in our individual lives. There is no point in anyone trying to understand what is written in the Bible if they refuse to act on it. The scripture is clear it is better if you don’t know God’s will than to understand it and fail to carry it out.

The events recorded in the book of Revelation are not always in chronological order. Too many have misinterpreted what John wrote because they thought everything would happen in the exact order written. Thinking events in chapter 5 can only occur after events in chapter 4 (I’m only using these chapter numbers to illustrate my point).

Those who try to decipher Revelation this way will always find themselves stuck. You’re sure about event A and event B, but the sequence of events doesn’t work when you link the two. The same mistake applies when we try to identify the characters. Remember, Revelation is a revelation of past and current events and a prophecy of future events.

If you are familiar with Old Testament prophecy, you can find many events 100’s of years apart in one or two verses. And even those are not necessarily in chronological order, as we understand chronological order. Some spend years trying to pin down when the events in Revelation will happen, ignoring “But of that day and hour no one knows, not even the angels of heaven, nor the Son, but the Father alone.” (Mathew 24:36).

The warning is this: be ready for Christ’s return, for He will return, and it won’t matter if you don’t understand the book of Revelation. Do not try to figure out the Revelation so you will be ready. Be ready now; live like you’re ready now.

Another fundamental truth to bear in mind is that the letters to the seven churches (chapters 1-3) are a current Revelation. The churches (or bodies of believers) named existed at the time of the writing of Revelation. The letters written to them describe current events they could relate to and an exhortation to correct those lacking, along with a brief prophecy of what would occur if they didn’t change. What is written to the seven churches named makes little sense to us now, but those alive at that time could easily understand what the comparisons used are and mean.

The praise and admonitions directly correlated to events happening in their time. And that is key to our understanding of their meaning. Sadly many have reduced the messages written to the seven churches to generalities, trying to explain their meaning based on today’s church, which is a grave miss justice. While we can rightfully draw comparisons between today’s church and them, never forget they were real churches. The individual letters were directed at those individual congregations first and foremost. Any other comparisons are secondary.

“After these things I looked, and behold, a door standing open in heaven.” (Revelation 4:1).

Another fundamental fact is the events recorded in Revelation are taking place in two different locations: on earth and in heaven. The events described in chapter 4 take place in heaven. While chapter 5 describes events happening in heaven and the results of those actions taking place on earth. Very few are privy to witness what is going on in heaven.

The detail of the Apostle John’s glimpse into current and future events transpiring in heaven is unique in the entire New Testament. And only the book of Ezekiel in the Old Testament records such detail.

We must always bear this in mind when reconciling the events depicted. We often confuse the two and relate what transpires in heaven to earthly happenstances. By doing so, we lead ourselves down a path of confusion. In our rush to figure out people and places, we leave behind the location described in Revelation 4:1-2 and wander off.

So we must remember that some of Revelation tells of events happening only in heaven.

What goes on in heaven does have earthly consequences. One of the meanings of “declaring the end from the beginning” is God sets things in motion in heaven before they happen on earth. The warning? Be ready and stay ready. The future is already in action, and prophecy is coming to pass. And it will affect some or all of humanity at an appointed time and place.

We will never know precisely the time and place, no matter how hard we try. What’s to come has already been set in motion in heaven; it’s coming, some things have already begun, and being ready means having the ability to recognize the outcome when it starts.

It’s easy to recognize the result after the fact. ‘Oh, now I get it,’ is a common reaction. But it’s over; it’s too late; understanding after the fact is of little use. Revelation tells us that many things have already happened, and their times have already passed.

While we spend so much energy creating timelines of future events, we may have already missed the beginning of those events described in Revelation.

“And in the morning, ‘There will be a storm today, for the sky is red and threatening.’ Do you know how to discern the appearance of the sky, but cannot discern the signs of the times?” (Mathew 16:3).

Let me use this example; how much time and energy has gone into figuring out who the beast in Revelation 13:18 is, and when will he make his appearance? Based on a clue given in the same verse, many think they have determined who the beast is. And because they are sure of their interpretation, they will, without doubt, be able to recognize him when he makes his appearance.

“Here is wisdom. Let him who has understanding calculate the number of the beast, for the number is that of a man: and his number is six hundred and sixty-six.” (Revelation 13:18).

Many have used the clue “six hundred sixty-six,” not only to ascertain the beast’s identity but extrapolated this to be the mark of the beast on the right hand and forehead of those who follow him. Some very learned Bible scholars, using numerology, have concluded the beast described in Revelation is Nero Caesar.

This article is not the place to agree or disagree with this determination, but the point we must never forget is; if the beast is Nero Caesar, then our timetable predicting the beast’s appearance and other future events is wrong. How so? Some date the penning of the Book of Revelation somewhere around 95 AD. If this is true, then the beast had already come and been dead for some 30 years before Revelation’s writing.

Even if the dating of Revelation is incorrect and was penned in AD. 75, Nero Caesar had already come and gone. So who is the beast now? And what use is knowing his identity, if he’s already come? Are we no longer concerned about the catastrophes described in the remainder of the Revelation? Certainly not; his identity is still important. If this identity is correct, we must differently view everything surrounding the beast.

As you navigate your way through the book of Revelation, there is one more rule-of-the-road we must know. Not everything in Revelation is symbolic. The seven churches of Asia are real churches in real cities. The Apostle John was a prisoner on the isle of Patmos when he penned Revelation.

The Lord Jesus is real; the things that will come to pass are real, so don’t allow yourself to become so caught up in trying to decipher the symbolic references that you overlook the real described. Today we know that Babylon The Great in Revelation 17:5 is Rome (or the Roman Empire). History records the fact the Roman empire is no more. So has Revelation already come to pass?

The Revelation, yes. All the events described therein, no. This is where a clear distinction must be drawn between things real and things symbolic. Because the book of Revelation contains real places, actual events, and prophecy partially fulfilled, we must never forget the end will come.

Let’s review the fundamental truths and mental guidelines we should use when reading and trying to understand the book of Revelation.

1. The letters to the seven churches (Chapters 1-3) are one message. Chapter 4 is the beginning of another message.

2. Some of the events described in Revelation occur in heaven, while others take place on earth, and others in both locations.

3. What takes place in the book of Revelation is not always in chronological order. It contains past, current, and future events, as do all Bible prophecies.

4. Not everything in Revelation is symbolic.

Like all of scripture, Revelation is to be studied thoroughly and carefully; assumptions will not do for the followers of Christ. Incorrect yet common assumptions about the book of Revelation have been accepted by too many today.

My sincere prayer is that you use these rules of Revelation, allow the Holy Spirit to guide you in reading and to understand the book of Revelation, and never enable foolish assumptions to keep you from being ever ready for our Lord’s return.

If you never understand anything in the entire book of Revelation, understand this; it begins with our Lord saying,